As America says goodbye to a president who promised but  failed to close Guantánamo, and prepare to inaugurate one who says he wants to “load it up with some bad dudes” we would do well to remember John Bernardi. As suggested by the title of his Short History of the Life of Major John Bernardi, written by himself in Newgate, where he has been for near 33 years a prisoner of state, without any allowance from the Government, and could never be admitted to his Tryal, Bernardi may hold the record in the Anglo-American world for the longest stay in prison by a person never brought to trial nor convicted of a crime. 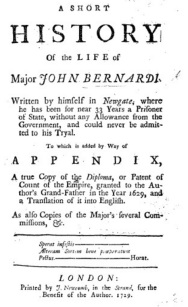 Bernardi’s troubles began in 1696 with the discovery of a Jacobite Plot to assassinate King William III. Habeas corpus was temporarily suspended, and dozens of people arrested. Within the next year a handful were tried and executed, and most others were released as habeas corpus was restored. But six men remained in custody in connection with the Assassination plot: Bernardi, Robert Cassills, John Counter, Robert Meldrum, John Chambers, and Robert Blackbourne.  With the exception of John Counter, they were to spend the rest of their lives in Newgate.

Ironically, the plight of these six men was in part due to what we might consider reforms meant to protect the liberties of subjects and the rights of the accused. First, there was the Habeas Corpus Act of 1679, which had enshrined in legislation what had already been a longstanding power of the judges of the King’s Bench to demand that a reason be given why a prisoner was detained, so as to determine whether the prisoner should be be bailed, remanded, tried or released. As Paul Halliday has argued, by making what had been understood as a royal power to protect subjects into a matter of legislation, Parliament had given itself (rather than the judges) the power to decide whether it should be enforced. Consequently, it could be taken away by Parliament in times of crisis, as it was in 1696, and at many other points (1689, 1745, 1794, to name just a few). The Treason Trials Act that went into effect in 1696 was another apparent new safeguard for English liberty that, in Bernardi’s case, had the opposite effect. It raised the bar for conviction by requiring that there be two witnesses to swear against the defendant. The government was unable to try Bernardi and the other five men  precisely because they lacked the requisite two witnesses. But convinced of their guilt, officials sought to hold them in jail. Once habeas corpus was restored, parliament passed another act specifically to hold six men for another year. And then another year after that. In 1698, the “Act for the continuing the Imprisonment of Counter and others for the late horrid Conspiracy to assassinate the Person of His Sacred Majesty” did away with the yearly renewals, simply stating that the six men  “shall be detained and kept in Custody without Bail or Mainprize during His Majesties Pleasure.” Similar legislation was passed at the accessions of Queen Anne, George I and George II.

Although hardly anyone today has heard of the six men confined but never tried for their alleged involvement in the Assassination Plot, they were remembered at least sporadically in their lifetimes. Even before Bernardi’s memoir was published, a Jacobite poet dedicated his 1706 poem Patience to “Major B[ernardi], &c.,” whose long “interment in that sepulcher of the Living call’d a Prison” made him an expert on the subject.  The History of the Press-Yard, written (at least purportedly) by a journalist confined to Newgate during the 1715 suspension of habeas corpus, put the prisoners’ narrative into the mouth of the “unfortunate Florimel, one of the State-prisoners that has been confined their [sic] upwards of twenty one years.”

The prisoners themselves worked hard to keep their cases from falling into oblivion. Collectively, they left a spotty but fascinating record of their attempts to get out of gaol, using an eclectic range of tactics.  Robert Cassills, for example, begged  Queen Anne after fourteen years for special consideration because of his his notable achievements in mathematics. Enclosed with his petition were certificates from other mathematicians that he had “solved the quadrature of a circle.” Bernardi mobilized even more powerful connections. By way of the Duke of Buckingham’s wife and mother he persuaded the Duke, then President of the Council of State to refer the case to Attorney General Edward Northey for a review. If Bernardi is to be believed, Northey made a report in his favor, but action was postponed when the Earl of Oxford unexpectedly “took the opportunity to move that Mr. Blackburne might have his liberty as well as Bernardi;” this led to so many further delays that both cases sputtered out. Bernardi was left to  wonder if any those “great statesmen” had been sincere in their offers of help, “the windings and turnings and Labyrinths of Politicians not being easily traced and found out by a simple and well-meaning honest man.” (p. 101)

Each death of a reigning monarch led to the automatic lapsing of the previous act imprisoning Bernardi et. al. “during the King’s pleasure” and opened a small window of opportunity before the next such act was passed wherein the prisoners could try to make use of the privilege of habeas corpus to come before a judge. After Queen Anne’s demise they managed to appear at the bar of the King’s Bench, having hired “three or four eminent counsel at Law,” and recruited substantial men to put up their bail. But when they finally came before Chief Justice Parker, he “made a harangue against them,” and although admitting during his “bitter and invective speech” that “he had never heard of any evidence charging them with the crime they were committed for,” the judge declared he was very well satisfied of their Guilt, by the proceeding of the first Parliament against them, and would therefore remand them back to Newgate, which accordingly he did.” (p. 103).  In an effort to stop Parliament from passing a new bill to confine them during a new king’s pleasure, the prisoners published  The most sad and deplorable Case of Robert Blackburne, John Bernardi, Robert Cassills, Robert Meldrum, and James Chambers. Humbly presented to the Parliament of Great Britain,  a broadside which powerfully invoked English liberty and the rule of law. “Presumptions of law are always in favor of innocence,” they declared, and they “prayed the benefit of the habeas corpus act, the common law of England, the Law of god and the law of nature, and the late most gracious declaration of his present majesty whereby he promises inviolably to defend and maintain the rights, liberties and properties of all his subjects.” Their confinement “without any legal Evidence given, or so much as offered to be produced against us” was, they pointed out, “without all precedent.” And, they concluded ominously,

Though now ‘tis our case alone, yet the Liberties of all Englishmen are highly concerned in it

This did them no good. Hopes were revived again in the wake of the 1715 Jacobite rebellion that George I might include them among the other rebels to whom he might grant mercy, but they were not included in the Indemnity Act of 1717 (the “Act of Grace and Free Pardon”). In 1727, following George I’s death, the three prisoners left alive (Bernardi, Blackbourne and Cassills) petitioned parliament in vain to try to stop the passage of yet another bill confining them during the life of yet another monarch. That failing, Bernardi turned petitioning George II and his consort, Caroline of Ansbach.  Bernardi’s wife Abigail (whom he had married in prison and by whom he had ten children) petitioned the Queen consort as well on her own. These late petitions from John and Abigail Bernardi continued to emphasize the legal irregularity of keeping a prisoner against whom no information on oath had ever been given. But, as would have been common with royal petitions, they appealed less to legality and more to compassion: they  asked the royal pair to consider Bernardi’s  age (over 70), his illness, long record of military service prior to his arrest, and the expenses he had laid out of £700 to lodge in Newgate. At the very least, they asked that if he were not released, he be moved to Kings Bench, “for the benefit of more air and less expense.” (p. 118)

The pleas fell on deaf ears. Bernardi died in Newgate in 1736, having spent forty years in prison.

One need not think that Bernardi and his companions were innocent to be  bothered  by this story of imprisonment without trial. It is especially troubling because it happened at a moment, the aftermath of the Revolution of 1688, that most of us associate with the preservation of liberty, rights and the rule of law against arbitrary tyranny. It reminds us that steps forward can be followed by steps back, and that even generally liberal governments have struggled to figure out what to do with persons who may well be guilty and dangerous but cannot be successfully convicted in a court of law. What not-so-liberal governments will do is a question that should trouble us even more.

“What will President Trump do with Guantánamo?”, Miami Herald, November 11, 2016

A Short History of the Life of Major John Bernardi (London: J. Newcombe, 1729). All parenthetical citations of page numbers are to this text.

For the Assassination Plot and its effects on trials and detentions, see Rachel Weil, A Plague of Informers: Conspiracy and Political Trust in William III’s England (New Haven: Yale University Press, 2013).

Petition of Robert Cassill is in British Library Additional Manuscript 61617, f. 110. There are petitions from Robert Blackbourne, James Chambers and John Counter in the same volume