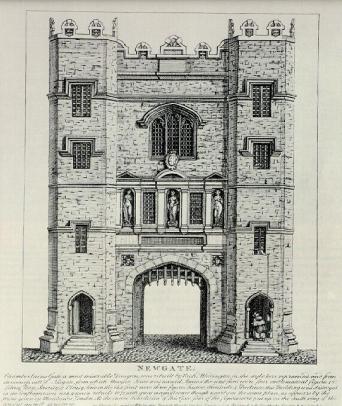 I want to explore these questions through a discussion of two sets of complaints from debtors in Newgate, five years apart.

At their session over the summer of 1702, Middlesex Justices of the Peace heard from William Aissicombe “on behalf of himself and the major part of debtors who are prisoners on the common side of Newgate.” Aissicombe had two grievances. First, James Fell, the Keeper, robbed prisoners of their charity money and weekly allowance of beef. Aissicombe accused three men — prisoners known as “the partners” who assisted the turnkeys — of also being engaged in this theft of charity. Aissicombe’s other complaint was that William Robinson, a turnkey, encouraged “lewd women, shoplifters, pickpockets and common strumpets to come to the felons and lie there all night.” Although Aissicombe’s is the only name associated with this first petition, he was joined in a second petition by two other debtors, Robert Barnes and Miles Borrough. The three men said that they had been “grossly abused and threatened” on account of the first petition and prayed relief.

Five Middlesex justices went to Newgate to investigate these complaints. It is not clear how many prisoners they interviewed, or in what setting, but they seem to have heard from more than just Aissicombe, Barnes and Borrough. The fact that the JP’s final report spoke approvingly of two informants as “penitents” who had proved “sensible of their former wickedness” suggests to me that they had spoken to felons, since the word “wickedness” does apply easily to debtors.

The investigating justices confirmed the allegations made in Aissicombe’s initial complaint, but went beyond it in the level of detail they provided and the range of issues they addressed. They identified seven (rather than three) prisoners responsible for the management of the charity beef, who took the largest share for themselves, making special note that one of these men was a felon under sentence of condemnation. They delved into the particulars of Aissicombe’s claim about lewd women, reporting that the turnkey Robinson had “locked up a whore with one Peter Flower al[ia]s Bennet al[ia]s French Peter, and she often lay with him, even when he was under sentence of condemnation.” They were decidedly unimpressed by the “pretence made of her being his wife,” which had been offered to them as an excuse by the keeper.

The investigators also brought up issues that had not been mentioned in Aissicombe’s initial petition. In some cases they may have been guided by their own priorities. They were shocked to find that the prisoners, encouraged by turnkey Robinson and other underofficers, drank confusion to the late Government and wished that God would damn King William and the parliament and threatened to knock out the brains of him that could not drink it.”  The investigating justices especially decried the fact that ” the debtors are often locked up on the Lord’s days and not suffered to go to chapel.” Given that two of the five investigating justices, John Perry [or Pery] and Samual Blackerby are identified in Robert Shoemaker’s Prosecution and Punishment as reforming justices aligned with the Societies for the Reformation of Manners, we can surmise that their report (and the subsequent orders they made to allow prisoners to attend chapel and prohibit Sunday drinking) reflected their own  more than those of the prisoners.

Another new issue that the JPs chose to investigate despite its absence from Aissicombe’s initial petition was the collection of garnish, the traditional payment that prisoners made to their fellow prisoners. The justices reported that the cost of garnish had risen from nine to seventeen shillings, and that it was brutally extracted. Three individual victims were named in the report. The first was Essex, a condemned felon who had wished to await his execution in the private space of the condemned hold, but was instead dragged out and stripped for garnish. The other two victims were among the three initial petitioners. The JPs reported that prisoner sometimes had their “very bedding taken away and sold, as it was particularly in the case of William Aissicombe.” And  “the petitioner  [Robert] Barnes when he had not bread to eat, had six shillings being his charity money taken from him by the said French [a “partner”] in the presence of the said Robinson [the turnkey].” Those lines exhaust what we can learn about the prisoners who petitioned the JPs. Given that Aissicombe and Barnes had been forced in rough ways to pay garnish, it remains an interesting question why garnish was not mentioned in the initial petition (or at least the JP’s description of it). Unlike the exclusion from chapel that I discussed above, garnish does seem like a problem that would have bothered the prisoners themselves.

James Fell promised to do better in 1702, but it appears that very little changed in Newgate.  There was another petition from prisoners in 1707, one of whom was Miles Borrough, the only remaining member of the 1702 group. I have not found the text, or a summary, of the 1707 petition, but several prisoners made statements that are preserved in the London Metropolitan Archives. Two of the informers were women: Jane Morris, described as a “poor prisoner for debt,” and Mary White, who was a prisoner’s wife rather than a prisoner. Mary’s husband Robert White also gave information, as did two other men, John Easton and Lambert Carter. There is one other prisoner, “Jones a surgeon,” who features prominently in testimony as a victim of abuse by Robinson and the turnkeys, having had his valuable lancets and razor smashed and himself put in irons for non-payment of garnish. But no statement from Jones survives (perhaps he had left the prison, or was dead, or scared).

Of all the 1707 complainants, John Easton comes most clearly into focus through the documents. He had a history of activism. He said in his examination he had previously “sent several letters to Mr. Fell” complaining of abuses by the partners. He had also done some research into prison charities, and had “seen some books” showing a decline in revenue over time.

We also learn from Easton’s statement that he had formerly lived on the Master’s side of the prison, but had moved to the Common side three months prior.  We get a glimpse of him at the moment he entered the common side, refusing to give the partners two shillings in garnish. Easton, however, avoided the payment:  the partners for some reason decided to collect the money from Lambert Carter instead. So it was Carter and not Easton who, upon refusing, met with retaliation. He suffered a beating at the hands of another prisoner, Maximilian Talbot, who seems to have been encouraged to pick a fight with him by the partners.

The complaints made by prisoners in 1707 echoed those made by those in 1702: The embezzlement or unfair distribution of charity by the “partners” again loomed very large, as did the presence of “lewd women” in the prison and the extortion of garnish. There was one significant new theme, however, in the 1707 complaints: crime inside the prison. Easton told the justices that felons, with the complicity of partners, picked the pockets of debtors, and of debtors’ visitors who had come to speak with them at the grate. Moreover, four of the five prisoners who gave depositions in July described, sometimes great detail, how thieves brought stolen goods into Newgate to store or sell them.

Shortly after being examined by the justices, Robert White, John Easton and Miles Borrough were assaulted. Maximilian Talbot, the man who was encouraged to beat up Lambert Carter in retaliation for his not paying for Easton’s garnish, took part in the attack. So too did Elizabeth French, who had been named to the JPs as the receiver of stolen goods inside the prison:  she brought sticks and called out encouragement that Mr. Fell the Keeper would reward anyone who joined in the attack on the “JP’s dogs.” Other assailants were two of the partners, two turnkeys, and one other man, George Brotherton, who was also presumably a prisoner.

This assault on the “JP’s dogs” raises the question, “for whom did the informants speak?” I’d like to think that were voicing the complaints of a silent majority, and that their attackers were motivated by hope of a reward from Keeper Fell. But I also wonder if the complaints to the JPs may have divided prisoners in more complicated ways. In 1702 Keeper James Fell had told the investigating magistrates that “as to the garnish money it is a custom, and that all the prisoners had the benefit of it.” Perhaps, then, the extortion of garnish may have been in the interest of some prisoners as much as it was to the detriment of others. I wonder, too, if the complaining prisoners chose to discuss the stolen goods operation not because it bothered prisoners but because they knew the JPs would react; the operation itself may have provided prisoner with access to goods and employment (more about this in a future post). Finally, we can wonder if William Hopley and Mary Holden, or John Croft and Patt Pope, two couples named by the informing prisoners as having been allowed by the turnkeys to spend the night together, may have resented the “JP’s dogs” as well, as would the many other women alleged to enter the prison each night and their male partners.

And so we hit the limits of our evidence. But I hope this analysis has at least raised some questions: what was the relationship between the issues prisoners petitioned about and the issues JPs investigated? Or between prisoners who made complaints, prisoners who cooperated with an investigation and prisoners in general?

Readers, if you have worked with prisoner’s petitions or magistrates’ investigations thereof, please share your thoughts!

A further note: by happy coincidence, the forum about early modern petitioning  currently happening over at the Many Headed Monster blog addresses some of the same issues raised in this post. You should check it out.

In the London Metropolitan Archives:

2 thoughts on “When Prisoners Complain”